Our ministry is called “Mission Field House” – We are committed to evangelism and discipleship, church revival and planting where necessary and meeting the needs of less privileged ones. Naphtali is a part of the team at Mission Field House.

Naphtali and a team of missionaries started a mission station in a rural area of Niger State about four years ago. They started a church and many people came to know Jesus as saviour. There are five full time missionaries based here and they run the church and teach in the school. A school was started in the Niger State mission station, due to requests from the local people, as none of their children had been to school. The work on the building was recently finished with help from money raised on a sponsored walk 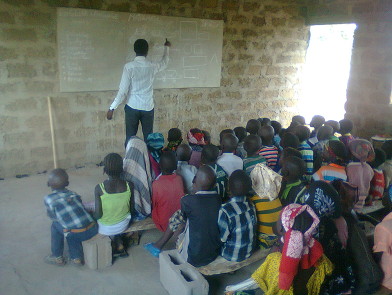 Naphtali first sent a team of missionaries to a rural area in January 2015, to preach the gospel. They have sent many missionary teams there since then and many people have become Christians.  They have so far planted six churches in the surrounding communities.

The people have requested a school and it is in the process of being built. We are raising money through another sponsored walk so it can be completed.

Mission Field House run other mission stations doing work such as training for missionaries, discipleship training, tailoring training, prayer meetings, fellowship and prayer meetings for the elderly and much more.

In November 2016, over 5000 people came to the convention. The convention went really well and God truly blessed it. Over 800 people made a decision to follow Christ.

After the convention new Christians are visited by a missionary to have one to one discipleship and then they are put in discipleship groups. They are also linked up to a good church – Naphtali has a very good relationship with local pastors and many of them attend the convention.

A Big Thank you from Naphtali

Find out more about Naphtali